How I got hooked

In 2002, I went sailing, really sailing for the first time. Starting from Harlingen in the Netherlands, on a flat-bottomed sailboat, heading out to the islands of Friesland. This is when I got hooked and didn't even know it. I found myself staring at waves like you may find yourself in front of a bonfire.

Years pass by while finishing school, visiting university and starting to work.

Daniel asked me if I'd like to join him and his father sailing around Mallorca/Spain in 2010 and I said yes why not?
We became best friends and sailed together ever since! 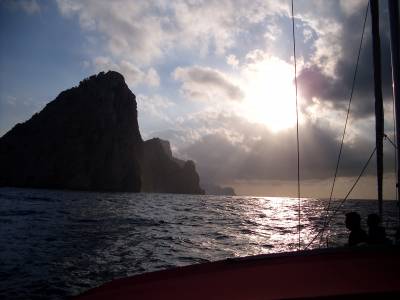 Every now and then we charter around Europe - The Netherlands, Croatia, Spain and so on and we try to get to the windy areas and catch some +4Bft so we can go sailing and not just have a decent time in anchorages.

Over the years, the staring at waves, horizons and the occasional school of dolphins grew more intense. The need, not to say the urge to go sailing grew. A small candle at first, was growing into a Christmas tree lit on fire.

Somewhere on the way I came up with the idea to find a way to go circumnavigate by hitching a boat or with my own, until the tree was fully lit and it was no idea no more, it became my life's dream to travel the world by sailing around the globe. What I did not know at this point, it takes more than just knowing how to sail a boat, how to navigate in bad weather, at night or have the money for it.

Then we went out on the Atlantic, island hopping on the Canary Islands (which is not as much fun as it sounds) and that tree I mentioned earlier - it lit the house on fire - I could not see through my salt crusted sunglasses any more but one thing - I want this! 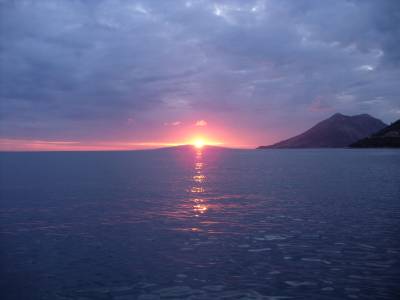 I was looking around used sailboats in my range, read up on circumnavigation and living on the hook. As monohull sailor, loving the heeling and the feel of a boat catching wind with the right trim, I was sure I am going for a cruiser explorer kind of built so, Amel and Garcia came on first. While pricey even used, fantastic boats to go.
Watching SV Delos with their Amel made me very interested then. Reading blogs and reviews, watching more videos and looking at different boats and the permanent discussion mono or cat, I found interest in catamarans but was not very impressed by most of them. Most of them are spacious or performance oriented, so neither of these far out specifications were tempting. While considering all pros and cons on monohulls and catamarans, I found a lot to read about keels falling off and discussions about inspections and used boat's keel surveys. Reading up in sailing magazines, I actually got a little scared of used monohulls.

At first I was looking for used Leopards until I stumbled across a small shipyard in the south of France, Outremer. They build performance-cruising catamarans - while that sounds catchy, it is! I was following La Vagabonde already but they did not have one yet. Researching Outremer some more I found out that there are neither a lot of used boats available nor build-slots before 2020 so I was looking at other manufacturers again.

I booked tickets for the Boot in Düsseldorf and a blue-water sailing workshop to get some more input on everything and see boats you do not see in the wild that often. With a strange feel in my stomach about what to actually look at as there are not many boats that I would consider in the first place I went to Düsseldorf. The workshop started off very good, at least for me, not so much for one of the speakers, he got sick - lucky me, Jimmy Cornell jumped in.

Walking around the exhibition for a while I decided to visit Outremer after all. And here we are now, they had a build-slot available in 2018, delivery in May '19. A couple of weeks later, I went to La Grande-Motte to test-sail for an afternoon and visit the shipyard. 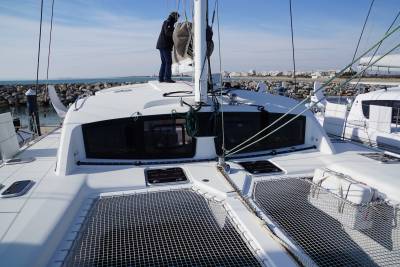 … and crazy me signed a preliminary contract for an Outremer 4X.